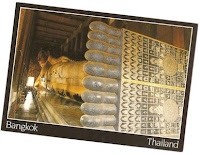 Years ago, Buddha was then Prince Siddhartha. He was born under a tree when his Mum was holding onto a branch when she went into labor. When he was born, he walked 7 steps and pointed a finger towards the sky and said "Of Heaven and Earth, I am the Enlightened". It was a joyous occasion however Queen Maya died after giving birth to the baby. The Prince was raised by his Step Mother and he grew up with much love. During his Birth, the King got all the astrologers to predict the Prince's future. A very old and learned one said "The Prince will either be a Monarch or he will be a Buddha. Unfortunate I am too old to benefit from him". The King was worried and he made sure that the Prince will always stay within the Palace vicinity. All people around him were young and everything was perfect. When the Prince came of age, he was learned, kind, compassionate and good in warfare planning. The King also got him a wife. However the Prince felt that something was missing. The break came when he saw 4 signs - Birth, The Aged, The Sick and Death. No matter how the King tried to keep these away from him but they surfaced when the time ripen. The Prince pondered - Birth, we come into this world not by our choice; we Aged not of our choice; we fall Sick not of our choice and we faced Death which is not our choice. The Prince decided he needed to find a way to stop these because he saw the pain and suffering of sentient beings. Leaving the Palace, leaving his wife and new born son he went into the forest finding The Path. He tried all kind of methods and he realized extreme ways will not help. One full moon night, he ate something offered to

him by Lady Sujata. He washed his bowl in the river and floated the bowl. The bowl floated 'up stream'. This was unusual and he knew that his achievement was near. That night he mediated with undivided concentration and attained Enlightenment. His Enlightenment shook the Universe. There were divine lights all over the world and the place he sat. All sentient beings rejoiced at the birth of an Enlightened Buddha. If you notice Buddha statues, you will see a posture whereby he sat with one of his hand over his knee cap facing the ground. This means the Earth is the witness of my Enlightenment.

There are many legends about Buddha. To the Buddhist, Buddha is not GOD. Buddha is our Teacher. He taught us the way out of sufferings. As a Buddhist, you must know Buddha fundamental teachings and if you do not, it m

eans you have more to understand about this GREAT Teacher. Buddha was very humane. Because he was like us, he realized that we all feel the same over the same issue. We all go through the same process of life and death. In this process there are things that you can do, a choice you can make as to where you want to be. Many people have not seen heaven and they doubt it. Same with hell. Therefore they go on to do all kinds of unkind actions to harm others and take others Life.

Other religion commented that Buddhist worships statues etc. What they do not know is they use the wrong vocabulary - it is not worship, it is venerate. When we knee in front of a Buddha statue, we do not pray to him. We venerate a Great Teacher and Enlightened Beings. It is like he is with us therefore some speak out to him. Buddha said "For those who know my Teachings know me".

I said before I am a non conformist type of Buddhist. I like to ponder over Buddha Teachings. I do not want to pretend I am devoted but nothing can shake my fate. I like Zen and next time I will share with you Zen stories that I like. Zen is Wisdom. If you are intelligent and well educated do not mean that you are Wise. Wisdom does not come with education.

Being Vesak, I like to share with you a postcard I bought in Bangkok which shows the 108 auspicious signs of Buddha's feet. Check your feet. You may be a special being yourself. I also put up some bookmarks that I have collected. I hope it brings home a message to all those that read my blog. May all Sentient beings be well and happy. May those suffering in the traumatic events in both Myanmar and China have peace of mind and continue to live well. For all those that did not survive, may their souls rest in peace by the merits of the Buddhas

and Bodhisattva!!!! Sadhu Sadhu Sadhu !
"Giving Life - Releasing Life Back to the Sea"
Posted by Loving Kindness@Samsara at 7:16 AM