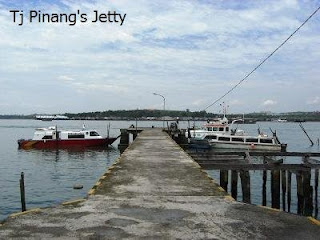 There are more than 3,000 islands under the Riau Archipelago. The more famous ones are Batam and Bintan. They are nearest to Singapore.

My main purpose of this trip was to see Gin as his wife was knocked down and died in an accident leaving behind a daughter. At the same time, I want to meet old friends, savor all the Bak Kut Teh, Char Kueh Tiow, Nasi Lemak, Otah Otah that I missed so much since I left Indonesia. I also want to do some shopping too. So 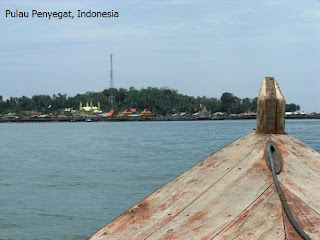 there are two itinerary on my schedule - Tj Pinang and Pulau Penyengat.

We set out as early as 6.45am. The sky decided she is not going to be sunny so it was drizzling all the way from home to the ferry terminal.

Who said the economy is bad? The crowd in the ferry terminal packed the place to full. Bus loads of tourists and Singaporean were in queue to get into the departure hall. When we arrived, I quickly ran to the counter to collect my tickets. The gentleman in the counter said ‘Madam, I think you will miss the 8.50am ferry. 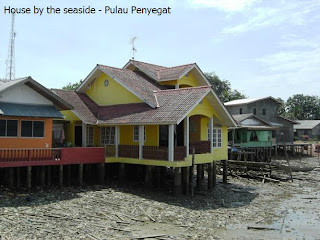 Look at the ‘Q’, you will not be able to get through’. I decided that I am not going to be passive so I walked up to the Immigration police officer and told him that I had a ferry to catch and I am only left with 15 minutes which I felt that the ‘Q’ is not going to move fast enough for me to clear formalities. The Immigration police officer was very nice. He made way for me and my brother to clear all formalities and we ran all the way to the boat because we were just out of the gate at 8.50am. Fortunately we managed to board the ferry and waited for another 10 passengers before she sailed. 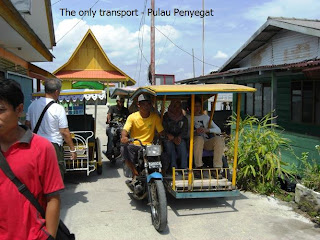 The sky darkened and started to pour. The journey took about 2 hours so I told Meng a little history about these islands. Bintan is part of the Riau islands (3000 islands), which is under Indonesia today. However during the early century, the Riau islands were under the ruler-ship of the Malay Sultanate. Pulau Penyengat was given as a wedding gift to a Princess and it became the center of government, Islamic religion and Malay culture. It was said that all the Malay Sultans were enthroned here in the Sultan Mosque. This is also a burial ground for Royal families and many of the famous sultans were buried on the island as well. Today, we saw more Chinese in Tanjong Pinang because it was set up by the Chinese and the Dutch when Bintan became a Dutch Colony. Pulau Penyengat remains uniquely Muslim and most of the families residing on the island are Indonesian Malays.

As the ferry headed towards Tanjong Pinang, it brought back memories of my time on this island, Bintan. It is 2 years since I left Indonesia. I used to drive myself around the island on weekends. The ‘cross country’ drive took me from Lagoi to Sungei Kechil, from Tikora to Tj Pinang and from Simpang Lagoi to Uban and Lobam. I love to drive alone. Usually when I exit Simpang Lagoi, I took the road I fancied and drove on until I hit a dead end and U-turn back. So my adventure took me to secluded spots of untouched beaches along the coast. It took me to cheap and good home cooked seafood restaurants. It took me to pineapple plantations that were so vast and my eyes cannot see the end of the area. It also took me to a sleazy kampong where they housed 800 'Women of Comfort'. Humm.m.m. those were the days!

To finish the whole story, here are the pictures I took while on the islands.
Posted by Loving Kindness@Samsara at 10:44 AM