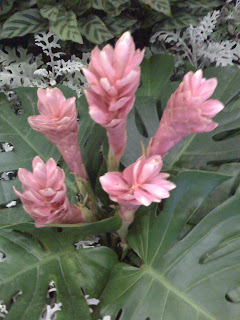 Yesterday I was shopping for groceries in a supermarket and suddenly a thought came to my mind. "Hey! why don't you call your Jiu Ma (舅妈)" and I did. Fortunately she was at home so I bought some gifts and hopped over to her resident.

Jiu Ma and Jiu Jiu are not blood relations of Mum. There are friends since kids and became sworn siblings. Jiu Jiu and Mum were very close. He addressed my Mum as 'elder sister'. Naturally Jiu Ma knows all about my family.

This was the first time I visited her after Mum's death. She was very glad to see me and it cannot be more apt in timing because it was Mother's Day. After one round of greetings and catching up with Jiu Ma and Cousin Sis Sim, the subject went to Mum.

Jiu Ma said that during the few days before Mum passed away, she felt uneasy and restless. She did not want to stay at home alone so she went to sit outside the house or went to the playground to watch children ran around. I asked 'Are you frighten?' She did not further emphasize. She mentioned that after Mum passed away about a few days, one night at about 11pm, she woke up to go to the kitchen for a glass of water, SHE SAW Mum !!!! She said Mum was standing at the main entrance of the house. I asked "Is it a dream?" She answered 'No'. I asked "Were you afraid?" and she answered 'No'. I asked again "How did Mum look like?" She answered "the same like she was alive".

What can you make out of this? Mum returned to visit Jiu Ma because she was concern about Jiu Ma and it was also the bonding and the love. Jiu Ma said Mum visited her a second time. This time it was at night and Jiu Ma was asleep. Jiu Ma got up to go to toilet and she saw Mum sitting by her bedside. When Jiu Ma got down the bed, she did not see Mum anywhere. Jiu Ma said she searched the house and saw no sign of Mum.

Tons of people love paranormal stories, here are some with personal experiences. My Mum loved Jiu Jiu very much. Jiu Jiu often visited the Library near our resident to exchange books that he had borrowed. He took opportunity to visit Mum and they would drink coffee and chitchats. I guessed they probably catch up on old times, old issues, new times and new issues (I am at work as Jiu Jiu always visited in the afternoon).

Jiu Jiu was diagnosed with cancer. In his final days, Mum visited him in the hospital. Jiu Ma told me that Mum sat by Jiu Jiu's side and the way Mum spoke to Jiu Jiu was like talking to a kid. Jiu Ma elaborated that Mum held Jiu Jiu hands and rubbed him. She spoke in a gentle tone: "Kuan, how are you feeling? Where are you feeling uncomfortable? Please eat something......" Mum looked at him with deep concern and love.

Mum at that time was already weak. She could not walk properly. Mum used a walking stick since she refused the wheelchair. Meng was her bodyguard as well as support and he brought Mum to see Jiu Jiu often.

When Cousin Sim broke the news that Jiu Jiu passed away, Mum was very sad and she cried so much. I deeply understand the lost of a family member and a friend. We were concerned for Mum's health but she held herself well.

Jiu Jiu worked at my natural birth place before and he knew we were adopted children. Mum told me Jiu Jiu used to carry me around as a kid. I had his attention and love because they had no kid of their own. They adopted Cousin Sis Sim much later. I cannot forget this gentleman I addressed as Jiu Jiu or 'Kuan Kor'. He was a tall and thin gentleman. He spoke with HongKong accent and always has something witty to say. He always had a little laughter when he spoke. As a kid I remembered he piggy back me around. He took me around in a bicycle. Jiu Jiu worked in a famous DimSum Restaurant once...anyone remembers 'MayFlower'? I had my fair share of 'chomp chomp' when he was the Restaurant Manager. Without failed he would give me egg tarts, law mai kai and a raw egg to mix, siew mais and har kows. Weekend 'yum cha' was a family affair.

As I started recalling my life journey. I realized that I am much love by 'all the men'...ha.a.a. Dad, Uncle Teik Oi and Jiu Jiu. There are more in time.

Back to myself - how come Mum did not visit me? She did not appear in my dream. Meng said he felt Mum's presence many times at home and he dreamt of Mum. I feel sorry that for seven years when Mum was ill I was not by her side most of the time. Meng resigned from his job to look after Mum full time. Beginning when Mum could still walk, both Mother and Son would hold hands and went for daily breakfast in the neighborhood. Neighbors saw a filial son.

Ya came home every Saturday to take Mum out to dinner in the neighborhood too. No one knew that Mum had me, her elusive daughter. I apologized to Mum that I am not with her most of the time. She understood that I had to work and bring home'bread & butter'. I was seconded overseas and came home on and off. Mum visited me overseas when I needed Mother's energy. I believe between parents and children there are a kind of bond and affinity which varies. I took care of Dad when he was ill and Meng of Mum.

Today I can happily say that as a child, I have done my duty to my parents. I took care of them, feed them, give them comfort and a house that they called their own. I have done my parents proud in conducting myself at work and in the society. I am definitely not a perfect child but I give myself 90/100. The feeling of living with no regret is great. Both Meng and Ya are also decent individual with their own achievements. If you read what I wrote and felt that there is something you need to resolve with your parents, do so now before it is too late.
Posted by Loving Kindness@Samsara at 5:15 PM