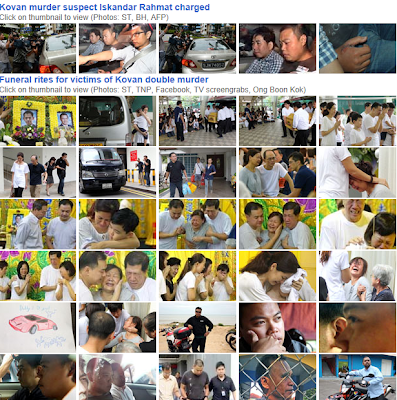 As I was typing my last article on child abused, on the same day in the afternoon a gruesome murder took place in another part of Singapore. This news shocked the whole Singapore as it was a double ''Death" - a father and son.
As we read with tongue in our cheek, we were wondering who is this cold-blooded person who killed a father in their home and dragged the body of his son underneath the car for at least 1km.
Many were speculating who is this person. Some said it could be a relative, some said Ah Long, some said business competitors and all the mind ran freely, each developing their fantasy even when police said don't guess. Well everyone drop their spectacles, it is none of the above. The suspect is even more shocking - it is a police officer! The Police Force now have to stomach all the finger pointing, criticisms and of course there are public attack. There are those who must create discords or add some caustic remarks to the already remorse Police Force. However I kudos our Police Force!
Anyway, it is not the fault of the Police Force. Everyone themselves is a black sheep. The only reason is you did not have the opportunity to be one yet. So don't point fingers so fast. The suspect I believe is not a bad person but circumstances made it that he did what he did. I am sure there are better choice if he needs to solve his problems but he resolved to slashing the old gentleman and than his son to death. As a police officer, he knew he cannot escaped the gallow.
Till now we knew he was brought to court. He was charged this morning of double murder but what caused him to do what he did? Why did he needed to kill? The son who ran after him was ran over by the car he drove and was dragged 1km away and dislodged in the middle of a busy road causing huge traffic jam. How did the whole incidents took place, under what circumstances, how were the victims hurt, where/what was the weapon...still is a ????
I think we should not blame anyone for this unfortunate event. We just have to watch the happenings. The Court will give justice to the bereaved family. The suspect will have to pay for his sins - I do not believe it is manslaughter because he slashed the victims throat/ neck areas knowing this will surely caused death. Moreover he is a police officer, big and tall, trained in defenses - both victims had no chance against him.
In Singapore if a suspect committed a crime as grievous as this and in a rich man house, he has no chance to hide his identity - there are CCTVs in the house which already have captured his doings. In actual fact Singapore probably have CCTVs installed in most places i.e home, petrol kiosks, cars, neighbour's home - what chance of escape have one?
My heartfelt condolences go out to the victims' family. The old gentleman''s wife who lost her husband and son on the same day; the younger victim's wife and children and the whole family probably is still in disbelief and shocked.
My heart goes out to the suspect mother and family and he is the sole breadwinner. It could have ended differently if only one holds one's temper and not react at the spur of the moment.
Death is certain, the time of death is uncertain and the place of death is also uncertain.........
Posted by Loving Kindness@Samsara at 4:13 PM