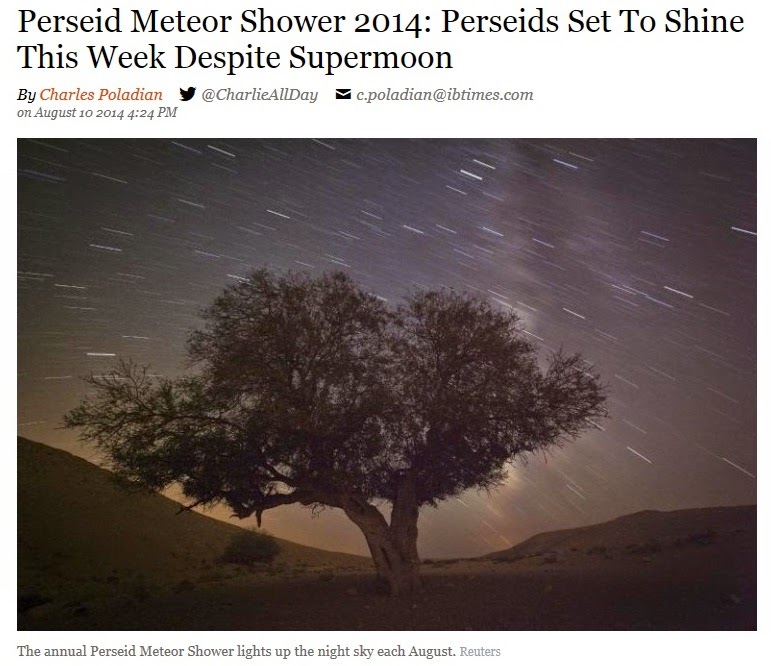 I have always been interested in star gazing. In Singapore it is too bright. When I was working in Bintan, Indonesia I love looking at the night sky. The stars are so bright and I feel that I can just reach for the stars. It made me very happy. At time I search for the North Star and sometime I can find the various horoscopes. As I came back to Singapore, this interest falls into the back of my mind. Today I saw this news and and  am thrilled. I do not know whether we can see it in Singapore, but go out of the bright lights and see if you can see some meteors. Don't forget to make a wish. (Below are shared by Courtesy of NASA).

QUOTE The annual Perseid meteor shower finds itself in an unusual situation -- competing for attention in August with the supermoon. August's full moon will pose a problem for the Perseids as the bright light will black out dimmer meteors.

The Perseid meteor shower peaks around Tuesday or Wednesday although there will be plenty of activity over the weekend and Monday. The Perseids gets its name as the meteors look like they originate from the constellation Perseus. Comet Swift-Tuttle is responsible for the Perseids as Earth crosses into the debris trail the comet leaves behind as it makes its way around the sun.

Comet Swift-Tuttle has a large nucleus which means it leaves behind plenty of debris and in a good year, stargazers could see as many as 100 meteors per hour at the Perseids' peak. Comet Swift-Tuttle last passed Earth in 1992 and travels in a 133 year orbit around the sun.

While many stargazers looking forward to the Perseids' peak are worried about the full moon Sunday and bright moon throughout the week, there are plenty of reasons to step outside and look at the night sky for a few meteors.

Swift-Tuttle's debris stream is quite wide, which means you could still see meteors toward the end of month, and the Perseids is known as the "fireball champion," NASA said. Compared to other annual meteor showers, the Perseids have produced 568 fireballs, an extremely bright, streaking meteor, since 2008 compared to 426 for the Geminids and 319 for the Orionids. "The Perseids are rich in fireballs as bright as Jupiter or Venus. These will be visible in spite of the glare," said Bill Cooke, from NASA's Meteoroid Environment Office, in a statement.

With the high rate of meteors and fireballs, chances are you'll see plenty of the Perseids despite the supermoon. Pre-dawn viewing yields the best results. In the northern hemisphere, stargazers should look towards the northeast to find the constellation Perseus. UNQOTE

ScienceCasts: Perseid Meteors vs the Supermoon

Posted by Loving Kindness@Samsara at 10:33 AM