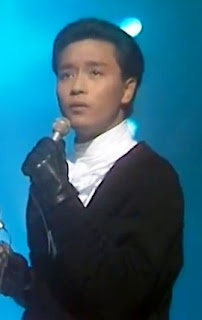 Ten years has passed by but the memory of Leslie did not fade. There is no new songs from him nor new movies from him - how can there ever be? I may not talk about him but at the back of my mind I knew he existed.

How time flies, people changed, environment changed but some feelings never change. Looking at all Leslie photos still stir my emotion. Hearing him sing all his top song tracks is still so enjoyable and was like yesterday he just sang them. His 演唱会performances was still so good to look at, he was lively, romantic, daring and he never failed to deliver and entertain.

Looking at how Leslie grew through the years as an inexperienced actor to the day he performed in all his acclaimed movies, he had come a long way. There were so many good movies which showcased his skills and commitment to the role but how many times did they give him the 'Movie King' title? People were biased and jealous of him. NO, he do not need the title as to those who loves him but I believe it hurt him a bit. Because he was a celebrity, all his privacy were opened for all to see. People praised him, criticized him, purposely bad named him but his fans love him.

Once again, my tribute to the one and only Leslie Cheung!

Posted by Loving Kindness@Samsara at 11:42 AM