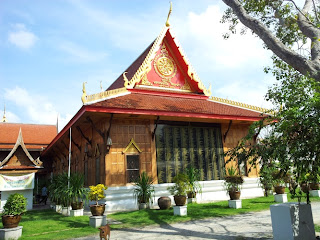 Wat Manao ( Manao in Thai means Lime) is situated in Suphan Buri. The Temple is more than 100 years old. The current Abbot is Luangpo Chuchat. He is also the head monk for Suphan Buri District. 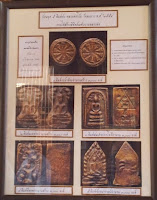 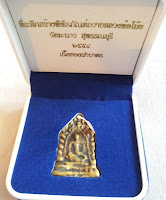 The Buddha in Wat Manao is slightly different in design as compared to most temple. This particular Buddha was placed near a riverside. The giant Buddha's statue was moved into the Temple with a roof above it by Luangpo Boi (he passed away 119 years ago).


When we visited this time, there were some constructions going on. Luangpo Chuchat showed us the place where he is building a museum to house all the old Buddha statues and amulets given to the Temple. He is also building a place where lay people can stay over doing retreat. 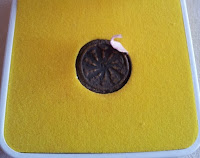 To farm this project, Luangpo Chuchat  commissioned a set of 5 Buddha's amulets which is unique to Wat Manao for sales. He only made 5000 sets and by the time we were there, it was left with only slightly more than 80 sets. These amulets are unusual and it became collectors' items.

I was very fortunate as Luangpo is my Master and he gave me 2 different types and 1 to my brother. The amulets are retailing to raise fund so it is Bht 1,000 per pc. The set of 5 is Bht 5,000.

Posted by Loving Kindness@Samsara at 3:58 PM