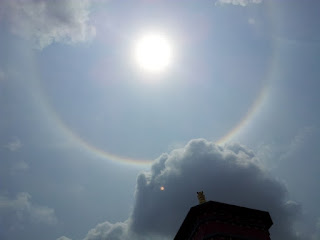 Kenpo Dorje give us an understanding to why we need to perform Naga Puja monthly. I never knew the significant of this puja until I did it with Kenpo earlier however the understanding is that these beings are around us. We see some and we don't see some but if we accidentally offend them, we may get into trouble.
There are people who believe and of course there are those who will shake their heads and waved their fingers saying 'Wa lau...why you so superstitious huh?". Actually in Buddhism, we believe that there are living beings on the Six Realms of Existence. Many people have never seen the celestial dragon so to them...don't see mean non-existence. However snakes are also from the Naga family and many reptiles are too.
Nagas are very clean and pure beings - the celestial, sea and land are the same. I am not talking about snakes but the very dragon itself. So to appease them, all offering must be pure and clean. We are not able to offer anything that has meat and if we go out sea, if we can we should not wear or carry anything that is made of leather. As for attire, it is better to be in white. You will say 'what the fuss? you don't even see them". Well just think - Prevention is better than Cure.
Nagas are Dharma protectors but not all of them. Like human beings, not everyone is good so don't be gullible. Human beings when angered can beat you up or worst kill you. Nagas will not beat you up but can kill you. There are many people who out of the blues contacted Cancer and the word that comes with Cancer is DEATH. There are people who think it is bad luck but Buddhist will tell you it is a Karmic debt. People think that they will live to a ripe old age, yes because these people are enjoying their good fruits. What if you antagonized a Naga and your Karma debt is about to ripen? The Naga will take this opportunity to harm you.
So when you are digging the ground, renovating a house, going to the forest or walk the along long lonely road, even if you drive, please be mindful. 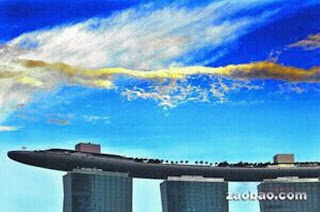 Attached a picture of the Golden Naga (Dragon) on top of MBS. Kangyur Rinpoche who we all acknowledged as the manifestation of  The Buddha of Medicine was performing Naga Puja on 18-7-12 at MBS. This picture was taken by a public and sent to LianHe Zaobao. It is not a super imposed picture. On that very same day, I was out in the sea with Ratna Rinpoche releasing Naga Vases and offerings and above the sky appeared a Rainbow and there is a red dot. How can two different phenomena appeared on the same day and about the same time?
Tomorrow (7 Sept 2012) is Naga Day again. So to those who wants to do a Naga Puja, you can checkout the website of Sakya Templing in Singapore.
May all Beings be well and Happy and be free from sufferings.
Posted by Loving Kindness@Samsara at 12:15 PM