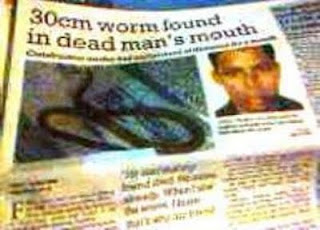 Recently I read in the newspaper of a man who died mysteriously. Before his death he has been complaining about stomach pain. The doctors in the hospital checked and found nothing. However the medicine did not helped so he continued to suffer pain to this unfounded reason. Unfortunately he died. After his death, they found a 30cm ringworm in his mouth?!!! What is this? How did the worm appeared in his mouth?

Actually in this world there are many unexplained happenings. We believe in science but there are things that cannot be scientifically proved. It is up to one to believe. After the man passed away, his good friend said he knew now "what it was".

Whether in the East or the West, we know that there are people practicing all kinds of mysterious ways that caused harm to others. Most of the time it is due to someone having grudges over another. They will go to these shamans to cast a spell. The lesser spells are to cause one to be sick, the heavier ones are to take the lives of someone. There are people who cast spell on women and vice verse where women did the same to men out of possessiveness which they wrongly mistook for love. There are people who are out of jealously harmed another by making them feel pain all over the bodies and no doctors checked could find anything wrong with them.

I heard stories from friends. Story #1 - Man A reported sick and checked into the hospital. Doctors did all the scanning, test. scope on Man A but found nothing wrong with him. They gave him medicine but the man checked into the hospital again with sever pain in his abdomen. He died in pain. An autopsy was done on him to find out the cause. When they where performing the cut...they found a big snake and all other organs were absent. If there was a snake, why did it not shown up on the scan, scope and x-ray?

Man B with the same condition checked into another hospital. They checked him because the man said he heard frogs croaking inside him. It sounded absurd but because he was going through so much pain, they did all the scan, scope, ex-ray on various organs in the body but found nothing. He died. Upon autopsy, the frightening happened. Frogs where jumping out from the cut but when they touched the floor, they turned into patches of bloods. It smashed all over the floor and was so gruesome.

I do not know how true are the above stories but I believe that there are X-files that contained unexplained happenings which were not make known to the public. What is the point of frightening everyone and when public react and there is no answer, it will spread panic. So no one is talking about such thing but in South East Asia such are not uncommon.

I pray for the safety of everyone that you do not encounter such dilemma.
Posted by Loving Kindness@Samsara at 10:02 PM