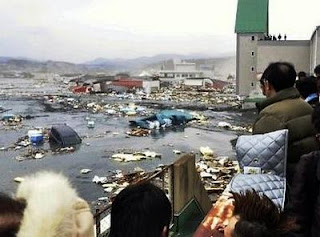 As we watched in horror, pictures after pictures, reports after reports on the television filled our eyes and ears with shocked. This time it is Japan. Most of the people living near the sea probably have lost their lives. We saw big sea vessels coming inland carried by the 10m strong water. Yes, it swept everything in its way. How fast again can human react to act of nature?

I did not know what happened as I was in a library deep in my revision for the coming examination. It is a temporary cut off from the real world and woes behold, when I stepped out.

Many years, when I was a kid, Mum used to say that Japan will one day disappeared overnight. After watching reports that Japan is actually sitting along the ridge of live volcanoes undersea, we may have some ground to ponder upon. I was in Japan and had experienced the minor swaying which I was not expecting. However to the Japanese, it is part and parcel of their lives. No one can be more prepared when the earthquake triggered a tsunami.

I was speechless as I watch. Although we are from different country and far from Japan but we are one people...we are Global Citizen. With disasters happening around all our neighbors, words of comfort is no longer necessary. The pained is feeling the pain; the lost is lost forever; the missing is yet to be found and will it be found; the bits will have to be picked up; the road is tough and the tough got to push against the odd...

Life is so fragile..my Guru keeps reminding us. How long will we live? You said 60s, some said 70s and some said 80s. No one wants to die and especially in such unpredictable way when you have wishes and dreams unfulfilled. In actual fact, we live by every breath we take. Once the breath is not coming, we are goners.

I pray for all the people in Japan - may those who are alive live well and in safety, the unfortunate ones, may they rest in peace. Japan at crisis need to be united and strong. Kudos to all those who lend a hand to help Japan, be it its own people, tourists, countries around the world - physically or in prayers too be well and happy. Deepest Condolences to the Japanese people.

I am glad and grateful that my blogging friend Cindy is safely back home in Malaysia. My friend's brother and sister-in-law with their 2 boys were in Tokyo when it happened and they just touched down Singapore with the first flight out of Japan. To my friend Tazuko, whose parents and relatives are in Japan be safe and the son and family of Aunt Lian is safe too.

Japan is plagued with earthquake, tsunami and now the nuclear plants leaked...is going through a difficult time. May we joined together in prayers that these disasters will be over soon and Japanese picked up and be strong.

The World is changing. I feel that the World is cleaning up and slowly will see all these as we draw closer to 2012. 2012 may not see the end of the World but we will see the World in a different light.