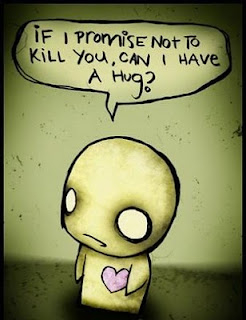 I wonder how many Singaporean are aware that terrorism is actually at home? Are they concerned about their safety? Did you ever think for a minute that your good neighbor , your friend, someone you know..... Think if you walk on the street with someone walking next to you who carries a bomb in his bag and if it explodes than...do you just say 'I am suey lah!'.

With incidents worldwide...the biggest being the World Trade Center 911 incident but again it was so far away from home. We sympathized with the victims and families and that is all. The pain is there but the pain is not ours.

Why do some in Singapore wants to do harm to this little island they call Home? We have to thank Mat Selamat for hitting the nail home. Again how many Mat Selamat are out there waiting for their opportunity to harm US? When it really happened, it is too late to cry or regret. Singaporean are so fortunate, complacent and dependent on the Government. To date our country is superb in their vigilance but there are people out there who are weak at will. They can sell themselves if someone gives them monies.

We all did wonder how did Mat Selamat escaped from such tight security? Although the government warned against housing him but they are against the notion of family. Even with such stringent punishment, can you say you turn your family away in such situation? The family may not be a terrorist but they are human and they have compassion. They know housing this person will put them in trouble and yet they did. Can we blame them? You can't...it is human. If it happens to someone in your family, you will do same...so don't blame.

Not blaming does not mean 'tidak apa'. Not blaming those whose emotions are invested and not see the bigger picture But it surely shows that if Mat Selamat is convicted and sentenced...what will the emotion of his family be? Will they multiply? This is home ground.

Looking at the world around us now...it is surely chaotic. All the unrest in the West, in the East...to the North and to the South. It is people throwing government and they no longer want to be suppressed. It is not only the people, Nature is also wagging wars at human!

Beginning of the Metal Rabbit 2011, the worst hit is Australia. Imagine Brisbane going underwater not to mention people loosing their homes and lives. Now the earthquake that shook New Zealand and left many dead. So it is not where you live, it is when is the time one will die and where. Many of those dead are foreign students.

So up in China, down in Australia/ NewZealand, east in Korea/ Taiwan/ Thailand/ Cambodia and west with Libya being the latest.

I can never understand that any religion, if it is a TRUE religion will want to take life or lives for the benefit on one cause. It is a human one is dealing with, it has its own thoughts and believes and can never be forced to do anything. When you scolded someone, if that someone do not retaliate does not mean that someone agrees with your doing. No two persons are the same and how can you force someone into your own mind...for a matter of fact, why don't you turn around and think like me? So you won't and than why should I?

There is justice in this World. When it comes to such a time that people cannot control themselves, Karma will.
Posted by Loving Kindness@Samsara at 11:32 AM